A graphics card is an important part of a gaming PC, a computer for professionals, or any other PC without the integrated GPU (graphics processing unit) in the processor.

Choosing a video card can be daunting if you don’t know what specs and features to consider to find the best GPU for your needs. In this GPU buying guide, you’ll learn how to pick a video card.

Graphics cards, like processors, are made for different needs. You can buy a more powerful video card for video editing or 3D rendering than most gaming GPUs, but it will be less powerful for gaming because it’s not optimized for it.

So the first thing you need to know is how you will use your graphics card. Then make sure the GPU you choose has the necessary ports to connect to your monitor, and that your monitor supports the resolution offered by the video card. Almost all graphics cards have at least one DisplayPort and one HDMI connector.

As a rule, the higher the resolution GPUs support, the more expensive they are. High-end models usually come with 1440p support, while premium graphics cards for around $1000 or more are the best for 4K.

Today among new Nvidia cards, you can even find an 8K graphics card that lets you play, capture, and watch in 8K HDR. If you can afford it, make sure you have an 8K monitor to enjoy the highest resolution. Although they are not so widespread yet, the future is now. There are already 8K videos on YouTube.

Also, check if your power supply is sufficient for the video card and has the right cables not to use adapters, which shouldn’t be a problem if you connect a modern GPU to a modern PSU.

The size of a graphics card is also important. Depending on your PC case form factor, make sure there is enough room for a video card by length and by height, as some models take up to 3 slots by height. Bigger cards usually cool better and work quieter.

Depending on the material the coolers and heatsinks are made of, video cards vary by weight, heavier ones often dissipating heat better. For a graphics card that weighs more than two pounds, it’s better to use a GPU support brace to protect the expansion slot from occasional damage or consider a PC case with vertical GPU mounting.

There are two major designs for video cards: blowers and open-air or axial cards. A blower is covered with protective material. A fan draws the air in, then the air is pushed out of the grille and PC case. This type is generally louder than an open-air design that lets the air in through coolers, then the warm air, hitting the heatsink, goes out from the sides of a graphics card into a PC case.

The difference between the two designs is not so noticeable. However, it can be for different PC builds. For smaller cases or if using CPU liquid cooling, a blower would be more suitable. But for overclocking and better performance, consider an open-air design with big triple fans for more intensive cooling in a large chassis.

There are only two manufacturers making graphics processors today: AMD and Nvidia. Intel, however, is also going to produce discrete GPUs. The first Intel GPU, Iris Xe DG1 is already available for OEMs. But it is a budget chip that works only with certain Intel CPUs and motherboards.

So for now, there are only two titans: Nvidia and AMD. Other companies like MSI, Gigabyte, Evga, or Asus take their chips and make graphics cards with additional features.

Nvidia CUDA cores or AMD stream processors are like cores in a CPU. The more, the better. But it’s useless to compare GPUs with different architectures by cores, especially to compare core counts of Nvidia and AMD.

Today’s new Nvidia cards come with the latest Ampere architecture, while new AMD cards are based on the newest RDNA 2 architecture. For many years, Nvidia’s chips have been outperforming AMD GPUs, but RDNA 2 significantly improved the latest RX 6000 series graphics cards.

Comparing the GPU benchmarks of the newest high-end graphics cards, it is obvious that the latest AMD GPUs are competitive. In the mid-range sector, it is even more noticeable, where AMD chips are also more affordable.

The two rivalrous architectures have different approaches to GPU memory systems. Nvidia uses Micron GDDR6X technology to double the bandwidth up to 936 GB/s, while AMD still sticks to GDDR6. However, they managed to squeeze 128 MB of Level 3 cache into the latest 6000-series GPUs. As a result, the Infinity Cache gives 1664 GB/s of effective bandwidth.

The maximum GPU cache (typically L2) is usually a few megabytes. But with the advent of RDNA 2 and Big Navi graphics cards, the situation has changed dramatically. So a cache can be also essential for increasing GPU performance.

RDNA 2 architecture delivers up to 54% more performance per watt over the previous generation. And new AMD cards are more power-efficient than the latest Nvidia GPUs.

However, Nvidia also brings a new breakthrough technology to impress consumers - playing at 8K resolution with ray tracing, not for all games at 60FPS, though. This is possible thanks to DLSS (deep learning super sampling) - an AI image upscaling technology that uses machine learning to upscale lower-resolution images to higher-resolution ones.

Since this technology is exclusive to Nvidia, you can enjoy playing ray-traced games with AMD Big Navi cards now only at 1440p resolution or at 4K but with a frame rate lesser than 60FPS, though they support 8K thanks to HDMI 2.1 and display stream compression. But AMD is planning to become more competitive by releasing the FidelityFX Super Resolution technology, analogous to DLSS.

Although there are not so many games supporting ray tracing, this realm is constantly evolving. And I’m sure it’s a real pleasure for every gamer to play a ray-traced game at 8K.

While RDNA 2 was designed for gaming, Ampere chips are produced for a wider range of usage: not only for gaming but also for engineers and professionals working with graphics or AI.

It may change in the future, though. AMD used to lag behind Nvidia. But as they became serious rivals to Intel with their new processors, the same seems to be happening now with GPUs.

Comparing two video cards of different brands with the same chip, you’ll see that there is no difference according to basic specs including engine clock (frequency), which can differ only by boost clock speeds. However, the difference in performance between models with the same chip is often only a few percent. But you may overpay for this slight improvement.

Keep in mind that to reach the boost clock speed, a card should be well cooled. Factory overclocked graphics cards usually come with better cooling, like models with liquid and hybrid cooling, or with three large fans.

Also, performance depends on the software you use or the game you play as a video card can be better optimized for a certain software. For example, if AMD GPUs are built for gaming, it’s ineffective to use them for video editing or developing AI.

AMD invented a new concept called a Game Clock which is considered to be a base clock for gaming, i.e. an average speed between a base clock and a boost clock.

Theoretical GPU performance is influenced not only by engine clock speed but also by memory clock, memory type, memory capacity, memory bus width, and memory bandwidth. As usual, the higher the specs, the better the performance.

An effective memory clock is a memory clock multiplied by 2 (GDDR3), 4 (GDDR5), or 8 (GDDR6), depending on the VRAM (video random access memory) type used. That means a GPU with GDDR5, for example, sends four data transfers per cycle.

Memory bandwidth depends on bus width and effective memory clock and is calculated with the following formula:

So the wider the memory bus and the higher the clock speeds, the faster the graphics card.

You can get a general idea about GPU performance by comparing specifications, but, like with CPUs, don’t forget to check also GPU benchmarks to know the actual performance. 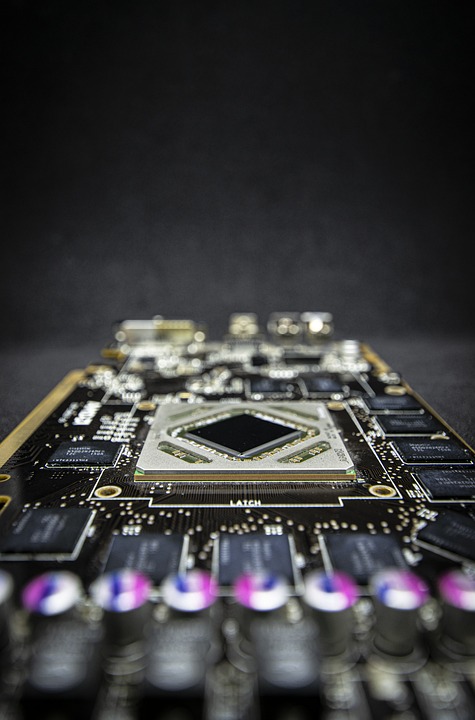 Fastchooser was designed for comfortable and fast graphics card comparison. Use the filters to find the best GPU, add the cards you like to the GPU comparison tool, and compare graphics cards side by side, or read about the best video cards.

You’ll find the basic GPU specs, sufficient for video card comparison and getting the general idea of which device is better for your needs. But if you need more information, it can be found in the description of every unit.

On our site, you can also find other PC components, use the online PC builder to build your own desktop, save and share your PC builds.